This summer, we’ve had the pleasure of working on all of the steel elements at the Austin Pets Alive! at 3108 Windsor Road. It was our largest project to date, the most complex, and we couldn’t be more pleased with the results and details. We were subbed out by the owner/landscape architect of the Garden Design Studio, Bill Bauer, who asked us to fabricate large planters, hanging and standing benches, bollards, a front bull panel fence, a back horizontal slat fence, a trellis, and awning, all in steel.

Matt Norton (owner/designer/fabricator at OES) took Bill’s initial design and worked out the details for how everything was constructed, including design decisions about trellis pattern and how it all attached to the building’s facade. Matt also came up with the specifics of the bench designs and how they hung from the side of the planters. This wasn’t your average GC/sub relationship. Two designers were able to collaborate and come up with something clean and modern for this wonderful organization, Austin’s no-kill pet shelter.

The building was originally a gas station, now converted into six bays to house dogs until they find their forever home. When outside of their bays, the puppies are able to play in the two stylish dog runs, find respite in the shade of the oaks in the large planters, and entice future dog owners through the bull panel fencing from the sidewalk.

While fabricating all of these working parts was an exciting challenge for OES, there were a few speed bumps over the hot summer. Before we completed the fabrication of the planters and the oaks were installed to give off some shade, the ground plane was white and extremely reflective. It was like working in a desert! Also, when our build team began the project in May of 2013, many neighbors walking by would stop and ask questions about the nature of the business replacing the gas station. Matt often received the brunt of west Austin’s frustration that a pet shelter, not a restaurant, was coming up in its place. OES was even featured in a local neighborhood newspaper, the article’s author confusing OES with the Garden Design Studio as one company, with unintentionally hilarious quotes by our team. My favorite line was from James Fitzgerald, closing out the article saying, “It’s not the end of the neighborhood…and definitely not the end of the world.”

Once the residents saw how beautiful it was all turning out, we could feel the excitement in the neighborhood. Many people stopped by and got our cards to schedule a consultation for a similar fence, furniture, or steel retaining walls. We finished up our portion of the project, and went back to residential installations, thinking the next thing we’d hear would be about the grand opening party. Turns out, the owner liked the trellis so much that she wanted an awning in the same design over the entrance to the building as well as one more planter by a gate. So back we came to APA!, finishing up mid-October.

Other companies finished out the stucco of the building and its paint, remodeled the inside, installed the vegetation, poured concrete, installed the astroturf, and updated the lighting during our tenure at APA!. The grand opening was yesterday, October 20th, and Matt and I brought the kids to see the general public interacting with our labor of love while picking out big-bellied puppies. I can’t wait to see how the space changes as the trees and vines fill out more and the Texas Mountain Laurel blooms next spring.

Find the complete APA! project folder, including before, process, and finished installation photos HERE. Be sure and “like” us on Facebook to keep up with ongoing projects. 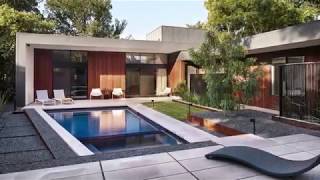